Playing at: Thursdays at 7 p.m. at UP Comedy Club, 230 W. North Ave. www.UpComedyClub.com

Basic storyline: Legendary Laughs begins with a question roared to the audience from the on-stage television screens: “Are you paying attention?” From that moment onward, it is impossible not to pay attention. Legendary Laughs is an eclectic assortment of Second City improvisation and sketch comedy that assaults the audience with raw laughs and witty scenes. A fast-paced comedy routine that everyone can enjoy, this show is a hilarious way 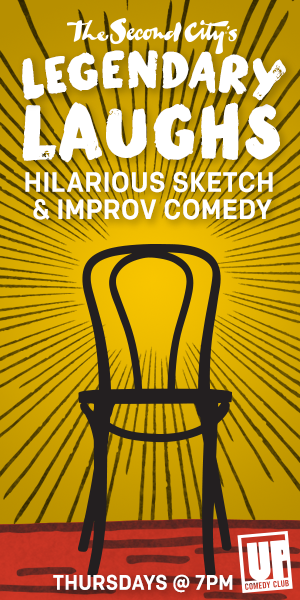 to spend an evening.

What stood out: It is partly the environment of Up Comedy Club that makes Legendary Laughs so fun. Don’t make the mistake of getting dinner before this show because food and drinks are served during the performance (and, somehow, in the dark). With constant access to the waitstaff, all without bothering the actors on stage, attending this show almost feels like going to a blues bar where neither the drinks nor the entertainment stop.

Another quality aspect of this show is the audience participation. Nearly half the scenes involve the audience in some way. In one scene, the cast interviews an audience member and then recreates a day in his life based on the answers he provides. In another scene, one of the actors gives the crowd his phone number and has them text him the lines to say. The various ways the actors manage to include the audience are imaginative and exciting, and the result is an upbeat performance that keeps everyone on their toes.

Final thoughts: Legendary Laughs is a simultaneously edgy and friendly show that is a comfortable way for anybody to experience the best of Chicago comedy.

The Big City Blog: Breaking in my ...