Playing at: UP Comedy Club, 230 W. North Ave., Tuesdays at 8 p.m. and Saturdays and Sundays at 4 p.m. www.UpComedyClub.com

What to expect: Second City wasn’t kidding when they decided call it Fast Loud and Funny. The show begins with a series of 10-second jokes — some visual, some political, some puns — set to throbbing music and strobe lights. Expect lots of quick, one-liner bits mixed in with longer sketches and some improvisation. They do recycle a few of the sketches from other shows, but there is plenty of new material, and the old jokes hit just as hard as the new ones. And, like every Second City show I’ve been to, they end the show with some pure improvisation, using cues from the audience as the basis of their material. 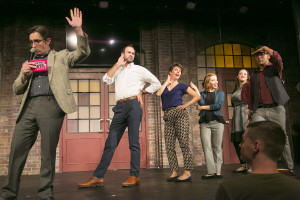 What stood out: This show benefits from a good mix of comedians — some are great at goofy, others play the perfect straight man. Each performer has a particular strength, and those strengths get showcased throughout the course of the night. There was a particularly funny sketch about cheerleaders at their 10-year high school reunion and a clever recurring bit that revolves around a young couple at a birthing class.

As always, the improv is unpredictable, but when it works, it’s the funniest part of the show. One line (I won’t ruin it for you) in a girls’ softball bit with the audience got one of the biggest laughs of the night. Likewise, the improv encore is a chance for the cast to be a little more loose and experimental, which definitely pays off.

Cozy on up: We asked active Chicagoans ...