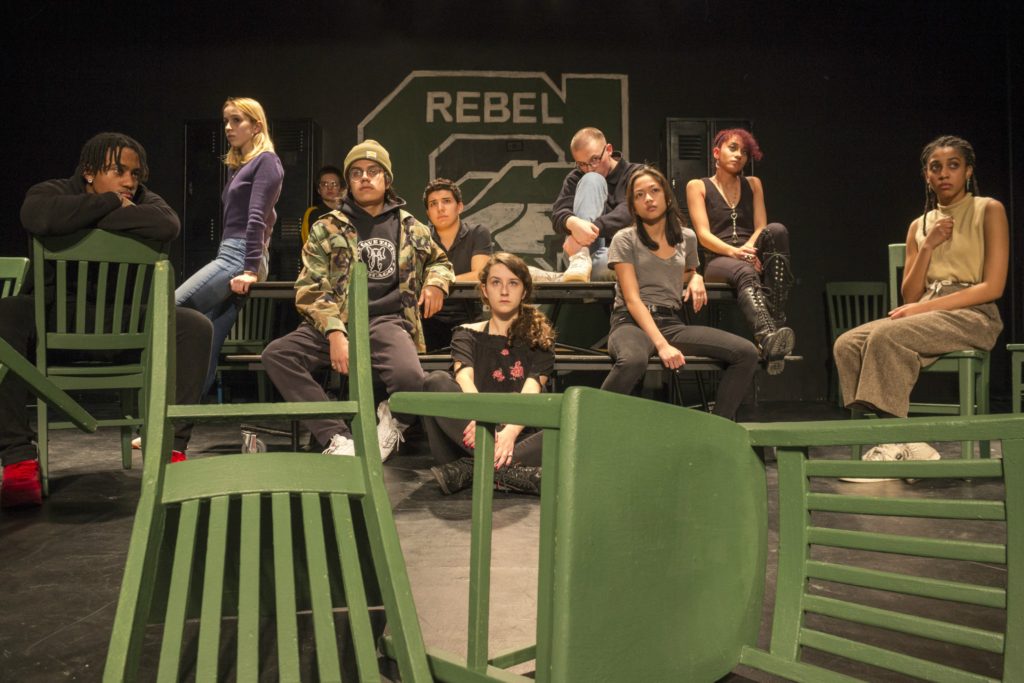 History in short: A docudrama about the 1999 Columbine mass shooting in Littleton, Colo., in which two students murdered 12 classmates and one teacher (and injured many others), this show examines the massacre and its possible psychological causes and impacts. Created by the late P.J. Paperelli and playwright Stephen Karam and directed by Mechelle Moe, Columbinus combines video footage of the massacre, diary entries, interviews with people who survived and testimonials from the parents. All these parts are weaved together to create a full-fledged narrative of the shooting that connects to those in the recent past.

Basic storyline: The show is split into two distinct parts. The first act focuses on the psychological drama of high school, with pauses in scenes to delve into the minds of the characters. As is typical in high school dramas (or musicals, for that matter), characters express their inner thoughts and fears in cliché monologue fashion. There is the bully who is secretly gay, the nerd who cannot play sports, the popular girl who is afraid to tell her mom that her boyfriend raped her. Of course, these are all traumatic, well-communicated situations that receive their full weight in the narrative. But they are mixed in with psychological narratives of the two murderers planning out their massacre. One is a depressed kid (played by Ervin Tobar) whose anger-management issues recur throughout the show. The other is a bullied kid (played by Brian Baren) who, though more afraid of their plans than the first, is nonetheless committed to their violent path.

In a terrifyingly realistic setup, the audience feels like they at the scene of the shooting — anyone might be the next victim.

The second act is more focused around recreating the scene of the shooting, with videos of the actual event projected as the actors onstage provide an abstract retelling of the day. It has a more coherent progression of narrative than the first act and, due to the weight of the action portrayed, greatly intensifies the tone of the show.

In a terrifyingly realistic setup, the audience feels like they at the scene of the shooting — anyone might be the next victim. The show systematically recreates the action before the death of each victim, using accounts from survivors to provide the context for the killings (where the students were located, what the shooters said to them before they shot). Honoring those who lost their lives as well as those who were injured and traumatized by the event thereafter, the performance balances the horrifying reality of the shooting with its psychological and social consequences.

While the show itself is quite powerful, equally impressive are the actors. Put on by The Yard, a professional youth-driven theatre company, the actors bring to their roles a notable intensity and commitment.

What stood out: The show is quite brilliantly able to make the isolated shooting correlate to the shootings that have occurred in our country since. Interspersed throughout is video footage of the modern leaders of the anti-gun movement (like Emma Gonzalez), reminding us that its events could represent a more universal community. Much of the script is structured as unified statements the actors say together, as if they represent high school students as a whole, speaking not just to the experiences of those victims in Columbine, but also those of the preceding shootings.

The cliché nature of much of the high school drama unifies the past and the present, reminding us that high school angst and mental health issues have happened throughout time and will continue — while adolescence is something we cannot change, gun laws are the only means by which we can take real interfering action. While the show itself is quite powerful, equally impressive are the actors. Put on by The Yard, a professional youth-driven theatre company, the actors bring to their roles a notable intensity and commitment. It cannot be easy to live through those scenes night after night.

Final thoughts: Especially relevant, given the recent gun-law controversies and marches, this show draws from the shootings across time, providing a moving and unifying depiction of the horrific consequences of our broken gun system in America. Pulling from a variety of theatrical genres, it provides an eclectic mix of storytelling and recreation to document the Columbine event in excruciating honesty.