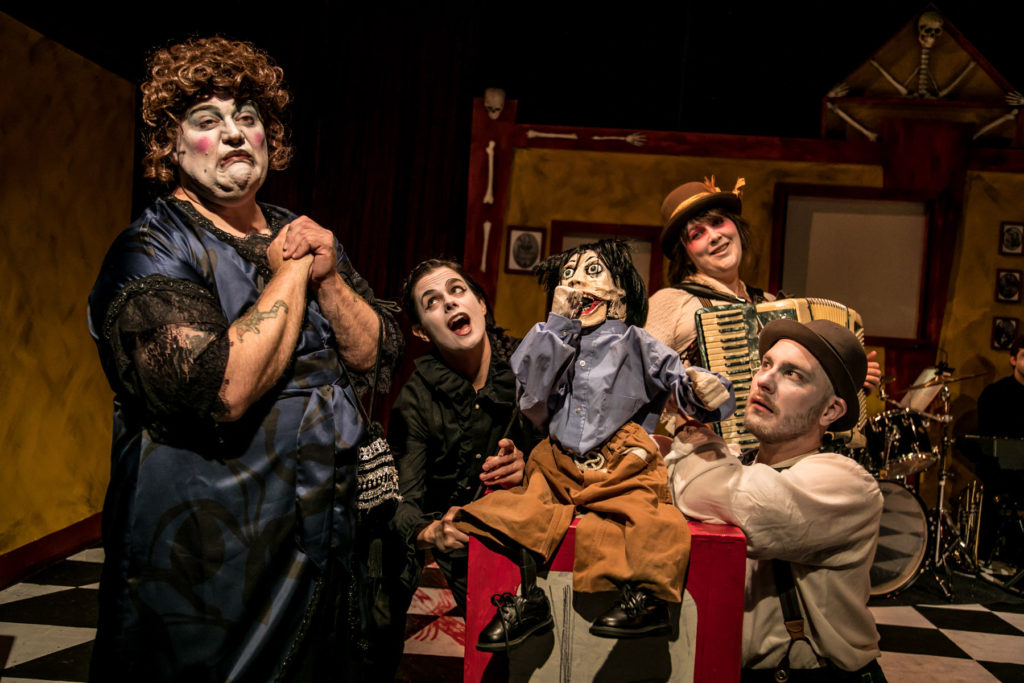 By Zak Buczinsky and Kelly Cunningham

Usually, when we get the chance to review a show for The Real Chicago, we bring each other as our plus one. This time, though, we both wanted to review the performance, so we wrote it together. Here’s what Zak and Kelly thought of the Athenaeum Theatre’s rendition of Shockheaded Peter, based on Heinrich Hoffmann’s popular German children’s book The Struwwelpeter.

Zak: The theatre was next to a leaning gothic-style church. It was a small box of a building that seemed to have once been connected in some way to the place of worship next door. We shuffled up the high-school stairway steps that led to the theatre, and on the steps were a pair of small, plastic dolls with nails sticking out of their naked heads and black paint crossed over the eyes. Kelly turned to me and pointed, “I think that is for the show.”

As a rule, I am wary of musicals, but after this creepy, wild and utterly wonderful experience, I think it is safe to say that I have a new favorite.

I was blown away. The music, the performance, the dancing and the humor were all wildly entertaining, but I was most impressed because I walked away thinking.

Kelly: I also pointed out to Zak that the pin-filled heads of plastic dolls weren’t the only hints that we were in for a spooky show. As the line of audience members filed in, the usher repeated to every patron (the house was full) that this show ran for 66 minutes and six seconds. We took our seats, daring to sit in the front row despite the bedraggled curtain and optical illusion-inducing tile on the floor.

The last time I was at the Athenaeum Theatre, I was seeing a show in the balcony of its largest stage. The intimate, almost claustrophobic layout this time added to the suspense as we waited for the show to begin. 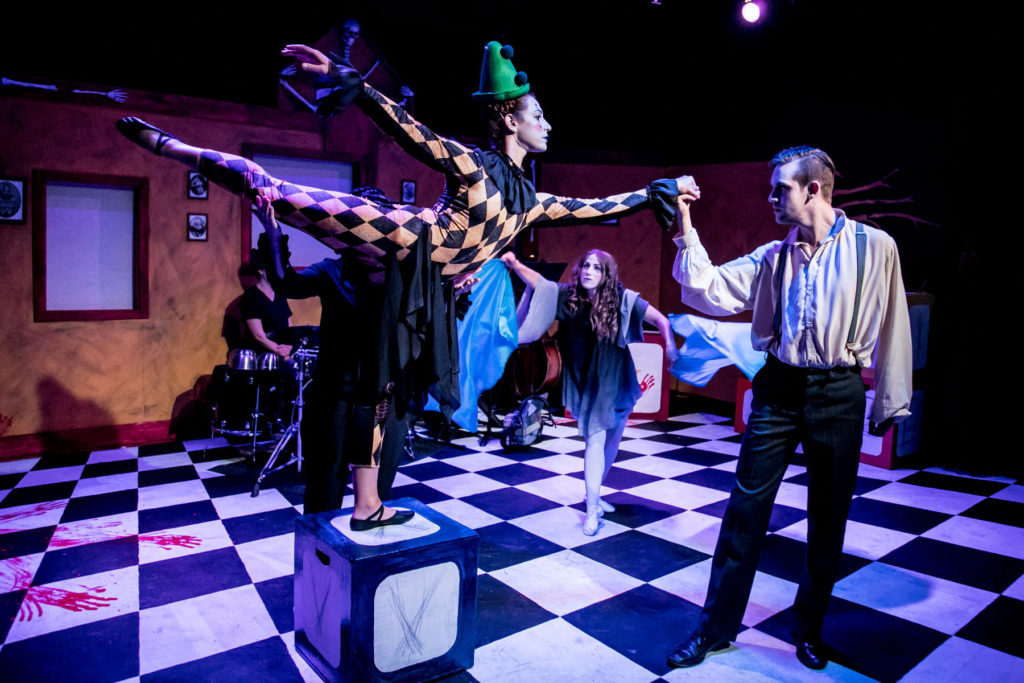 Zak: With a drum roll and a dramatic flourish from the ghostly clown of a narrator, the show began. From the first moment, I was entranced. With oversized stacking blocks for chairs next to streaks of blood on the floor, and a de-limbed skeleton set into the plaster walls, the set was like a child’s dollhouse from hell. Maybe it is because I have a soft spot for the macabre, but the combination of childlike and gothic really got my attention.

Kelly: What struck me first were the personalities of the actors. The narrator did an excellent job of poking fun at his over-the-top attitude, breaking the fourth wall right off the bat to get the audience on his side despite his creepy tendencies and promises of horrific ends for naughty children. Even though only the narrator and two other cast members played the same character consistently, by the end of the show, I felt like I knew every member of the ensemble because of their well-crafted facial expressions, mannerisms and individual talents. After sharing a little bit about himself, the narrator begins by telling the story of a lovely young couple receiving a delivery from a stork that looks like it took a walk on the wrong side of town.

The actors seemed almost to revel in the violence and horror of the cautionary children’s gore stories, which I think was very purposeful.

Zak: I really like that observation because I think it hints at the deeper ideas of this play. Watching the actors take on various roles, often switching between playing the naughty children and inhabiting the vicious furies that release their punishments upon the kids, was sort of like watching a troupe of demon clowns put on the brutal and macabre tales. The actors seemed almost to revel in the violence and horror of the cautionary children’s gore stories, which I think was very purposeful. However, at the same time that these devilish mimes performed their dark songs and shows with monstrous puppets and chilling makeup, the story of the two parents who abandon their hideous baby from a stork continues with consistent actors the whole time.

Kelly: The parents’ slow descent into alcoholism and insanity is accompanied by the narrator’s dark humor and interrupted by song and dance. I felt the music got a bit redundant toward the end (Zak completely disagrees and has been looking up songs by the band, the Tiger Lillies, who wrote the original score), but the actors kept up the energy throughout every tale, often employing advanced gymnastic and dance techniques to add to the weirdness of the performance. My favorite number featured “fidgety Phil,” who can’t sit still at dinner, messes up the table and ends up on the wrong end of several forks.

Zak: I think the reason that I liked this show so much wasn’t just the creepy accordion music and over-the-top musical numbers. Although I definitely enjoy listening to a satan jester rock away at accordion more than I enjoy hearing a green witch sing a 10-minute musical number about defying gravity, this show stuck with me mostly because of the point it made. The story of Shockheaded Peter and his horrible parents ends with the parents’ transformation into a couple that is as dirty and disheveled as the ungroomed child they neglected.

The combination of this spine-tingling tale with the uber-violent cautionary children’s stories seems to hint at a darker point — that the supposed evil that these tales warn against in children is demonstrative of the inherent natural evil of adults. It is as if these dark nursery rhymes are so horrible because the parents are too selfish and evil themselves to teach kids without using violence. Overall, I was blown away by this production. The music, the performance, the dancing and the humor were all wildly entertaining, but I was most impressed by this show because I walked away thinking.

As Kelly and I walked down the steps strewn with the severed heads of dolls, I found myself thinking about the nature of evil and horror and how it relates to our childhood. Perhaps, I thought, adults don’t need violent cautionary tales like Shockheaded Peter because it helps them discipline their child, but rather as a vicious catharsis, releasing their pent-up fury onto their misbehaving children.

Shockheaded Peter runs through Sept. 16 at the Athenaeum Theatre located at 2936 N. Southport Ave. Tickets can be purchased at www.AthenaeumTheatre.org