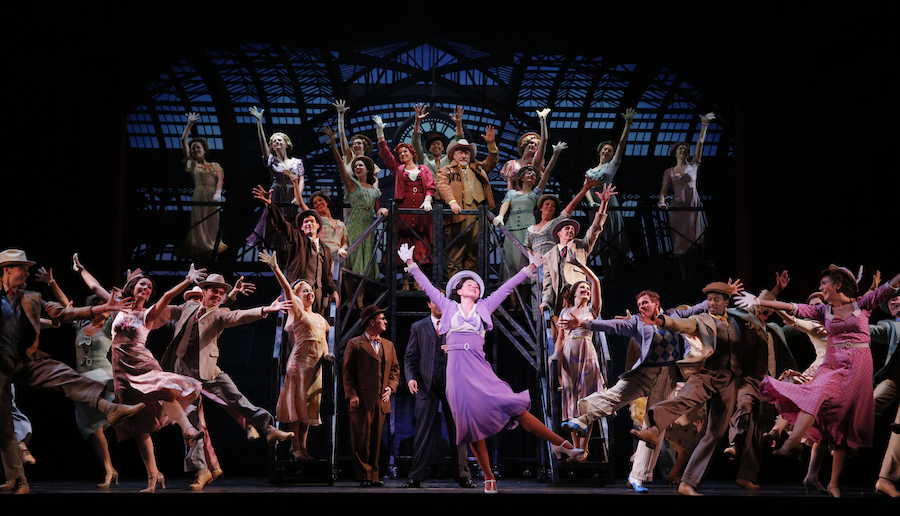 Basic storyline: Bright-eyed and bushy-tailed Broadway hopeful Peggy Sawyer (Caitlyn Ehlinger) tap dances her way to the top in this sunny country girl-to-city girl 1980 musical. Set in 1933 in the midst of the Great Depression, Sawyer’s plucky youth and talent (and no small measure of adorable clumsiness) endear her to the cast of a new show, Pretty Lady, and its director, the willful and intense Julian Marsh (Matthew J. Taylor).

What stood out: 42nd Street is a classic, as well as the ultimate “backstage musical” — completely set backstage where all the real action happens (with clever foreshortened drops, names in lights and set pieces designed by Beowulf Boritt that often are painted on scrims, making transitions fade in and out and seem almost old-world movielike). The musical follows Peggy, the company of dancers, the director and, at some points, even refers to the live orchestra as it plays brassy show 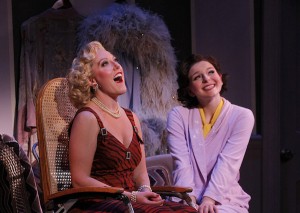 tunes. The show captures classic drama and jazz — and artists desperately trying to hold on to the beauty of the roaring ’20s. You’ll be sunk into this world from the first time someone uses slang like “kid” (for chorus members), “shinbusters” or “hoofers” (tap dancers).

The show is a celebration of the pure appreciation of talent and youth: cheery, charming, bright and sometimes even self-deprecating when it comes to its own self-references and ’30s gender stereotype (which is often subverted and played wittily, suggesting that women have all the power when the men think they do). Kaitlin Lawrence adds a little glamour and sex appeal to the innocence of the show with her portrayal of Dorothy Brock, a blonde bombshell originally slated to be the lead in Pretty Lady whom Sawyer replaces. Her deadpan humor (she refers to her unsavory but wealthy suitor as being “like a dead, wet cobra”) and beautiful voice that she fully showcases in “I Only Have Eyes For You” and “About a Quarter to Nine” (in which she forgives the young starlet Sawyer) bring a little edge of sadness, rounding out her rich prima-donna character.

As a first-timer at 42nd Street but a longtime musical theatre lover (and former theatre student), the visually stunning choreography and beautiful compositions of shadow and lighting by Ken Billington really brought the show to life for me. Shadows of characters are cast and dance 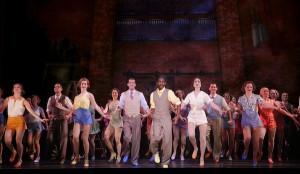 overhead; the chorus dancers are lit in pretty pastels, which show off the spring-colored costumes, often glitzy and glamorous. Many a sparkle and glint of light are thrown into the audience off costumes or the tap extravaganza of the 30-some dancers. With its lights, costumes and talent, 42nd Street perfectly encapsulates the pure euphoria of musical comedy theatre — what it’s like to be part of the family of a company, part of a show, even if you’re in the audience. As Julian Marsh says near the end of the show: “Musical comedy: The most glorious words in the English language!”

Final thoughts: This show is a treat and clearly beloved. From the moment the curtain (framed by a gold proscenium) rises and shows off the cast tapping in tandem, cheers and roars rise up from the audience. During a quiet moment when Sawyer (Caitlyn Ehlinger) was performing one of her solo tap routines, a woman next to me cried, “So amazing!” Like Peggy Sawyer herself, 42nd Street has heart, and I never want to see it broken. Also, like the song from the play within a play, Pretty Lady, this show is all about the dames: talented women supporting talented women, and the age-old adage that youth and beauty will get you far, but heart is where it’s at.

The Local Corner: Exploring the Armitage and ...