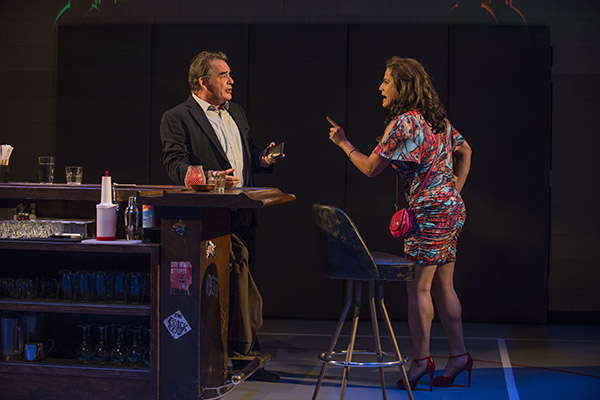 Basic storyline: Domesticated follows disgraced gynecologist-turned-politician Bill Pulver as he confronts — no, stands back and watches — the women in his life duke it out over what they really think about him and his actions, namely a plethora of sex scandals leading up to one instance of shady, and possibly incriminating, sex and injury of a prostitute. Bill must wait for forgiveness that may never come from his wife, Judy, his daughters, and quite feasibly all women if he ever wants to try to lead a normal life again.

In talking about his production, Bruce Norris said: “We see women as a civilizing force — the things they want lead to social stability, and the things men want lead to chaos and destruction.” Domesticated either supports this idea or turns it on its head in its hilarious, witty and shrewd exploration of

What stood out: The set of Domesticated, a perfectly reproduced chalk-white gym complete with cinderblocks that provided an excellent backdrop for projections, the richly-colored costumes, and the Pulver dining room, will bring the audience right back to their awkward middle-school days. This is especially fitting, as the show is framed by the youngest Pulver daughter, Cassidy, and her school presentation on sex in the animal kingdom. Each example she gives — hyenas, seahorse, anglerfish — illustrate a worse and worse position for the males in the species, which reflects on Bill in the show and adds to the hilarity of picturing Bill as “an appendage, supplying sperm as needed.”

The play also utilizes a unique way to break down and reconstruct the fourth wall, with actor crewmembers running around filming for the various talk shows on massive cameras, which the audience is invited to look at and see the shaky zoom-ins on Bill’s bewildered face, just like real politics.

Domesticated, in its Chicago premiere, features all female characters besides Bill. The actresses are incredibly engaging, smart and flamboyant, with Bill in the background as basically a wine-holding setpiece in act one. In act two, there is more of a light shown on the fremdschamen-inducing, strained relationship between Bill and his daughters (whom he calls “guys” in an ironic attempt to relate): his acerbic, fight-for-the-cause-or-just-to-fight older daughter Casey and his almost-catatonic daughter Cassidy, whose physical movements betray her intense stress in her parents’ relationship.

Domesticated is full of humor, ranging from a kind of satisfying dark slapstick — like when Bill finally talks again before intermission and he just takes a grand 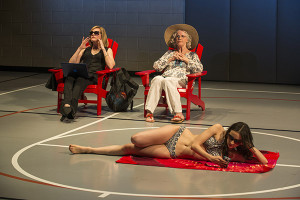 pause and says “I’m not happy” — to wit and subtext, to plain irony. Bill, at one point, sarcastically barks, “Soon, you won’t need us at all,” which is reflected in Cassidy’s last animal-kingdom example, when she calls males of the species “an obsolete vestige from older generations.”

The hostess of a talk show that Judy, Bill, their marriage and Judy’s book is featured on asks, “What the hell is wrong with you men?” the irony of which is not lost on the audience or the characters in the play, who all catch on (or maybe not) that it’s the women who are creating all the strife.

Final thoughts: See this show if you want context for any of the following: an almost all female Fight Club scenario, where lady doctors almost take down a man in an eyepatch; clitoris piercings as discussed by a grandma; or quotes like, “Your semen is extremely caustic, it burns me.”

Also see this show if you’re in it for the more serious — not only all-female relationships, like multi-generational grandma, daughter and granddaughter, but the complicated and easily breakable relationships between father and daughter and husband and wife. Many questions are posed by Domesticated: Why do anything? What is a good cause? Why is everything (marriage, sex) a means to an end? Well, you could take Bill’s answer (“Life is sad”) or, as an audience member, you could take in Domesticated’s nuanced humor and startling clarity for yourself.