General Features
Home›featured-blogs›General Features›Game on: Whether you’re looking for ping pong, darts, shuffleboard, bowling or an arcade, Chicago has the bar for you

Game on: Whether you’re looking for ping pong, darts, shuffleboard, bowling or an arcade, Chicago has the bar for you 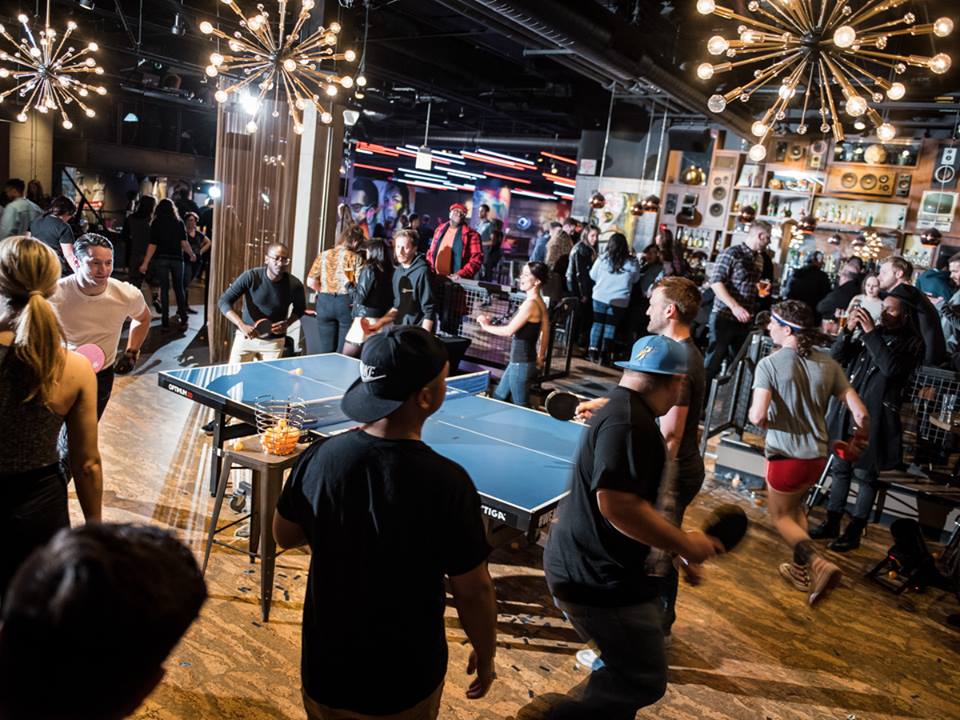 All the rage right now, especially in Chicago, are bars that provide various forms of entertainment, where you can have a cocktail or craft beer in one hand, and a dart, paddle, joystick, bowling ball or pool cue in the other — and maybe a little competitive fire mixed in between.

What follows is a look at some of the city’s popular establishments offering games that will make you feel a bit nostalgic. And might just make you want to take on the world.

Actress and co-founder Susan Sarandon brought Spin, her ping pong social club, to Chicago in 2016. The idea originated after legendary ping pong parties took over a New York loft back in 2007, but has since expanded nationwide and includes a vibrant atmosphere and some tasty small plates and flatbreads that are perfectly shareable for groups. 344 N. State. Chicago. WeAreSpin.com 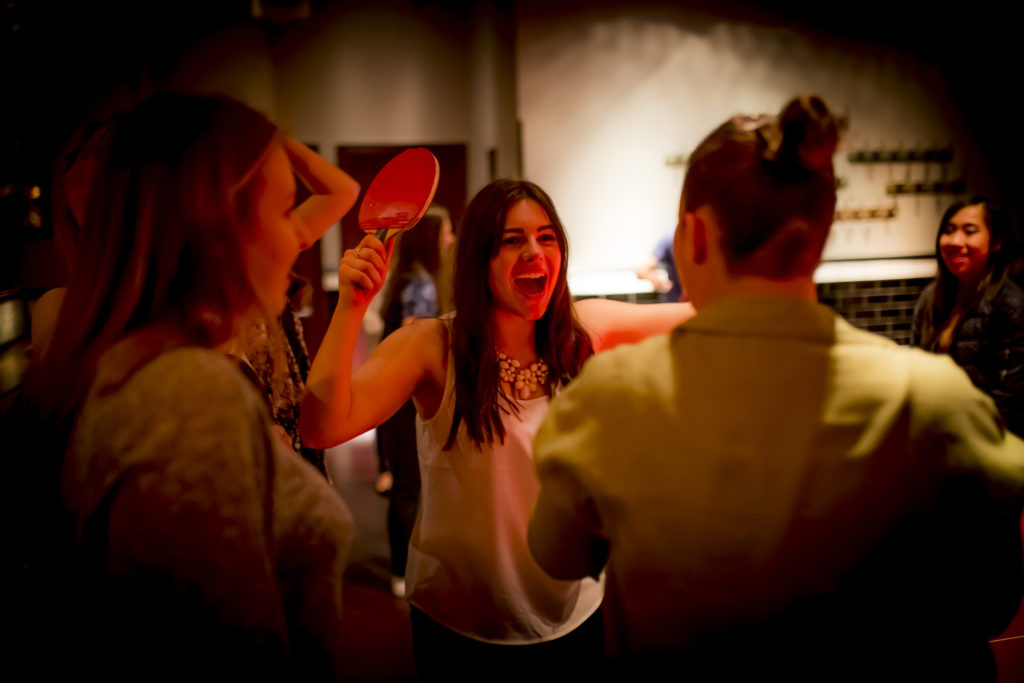 AceBounce, a concept launched in London in 2012, is an immense ping pong playground with award-winning chefs and mixologists, creating an unprecedented party experience. Partying around a ping pong table is a completely new way of going out with friends, especially when set against the venue’s stunning design and high-end finishes. Games gurus are available to organize and entertain groups with a multitude of fun options. 230 N. Clark. AceBounce.com

The creators of AceBounce have a new dart bar opening this month called Flight Club, located near the Chicago River. This will be the third installment, with the other two bars found across the pond in England. No plastic tips here; we’re talking real darts. But electronic scoring, tutorials to help with different games and a fun-filled vibe will eliminate the intimidation factor in case you’re not an expert with your aim. 111 W. Wacker. FlightClubDarts.com

Royal Palms Shuffleboard Club focuses on the generation that doesn’t mix black socks with sandals. … Instead, it’s a hip space with loads of shuffleboard courts, a rooftop deck, Caribbean theme with cabanas and tropical cocktails. 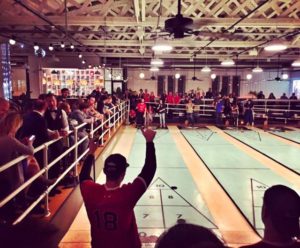 Royal Palms Shuffleboard Club, the viral phenomenon from Brooklyn, opened its second location this past spring in Chicago’s Wicker Park neighborhood. Focusing on the generation that doesn’t mix black socks with sandals, this is not what you’ve come to expect from the game usually reserved for the decks of cruise ships or retirement communities. Instead, it’s a hip space with loads of shuffleboard courts, a rooftop deck, Caribbean theme with cabanas and tropical cocktails, and food trucks conveniently parked outside. 1750 N. Milwaukee. RoyalPalmsChicago.com

At Headquarters Beercade, you can either pop in the earbuds and feel like a pinball wizard or challenge a friend to a Burger Time duel, all while drinking a few craft beers. With more than 10 pinball machines and dozens of throwback arcade consoles, Headquarters is a great spot to get your nerd on and socialize simultaneously. 213 W. Institute Place. HQRiverNorth.com 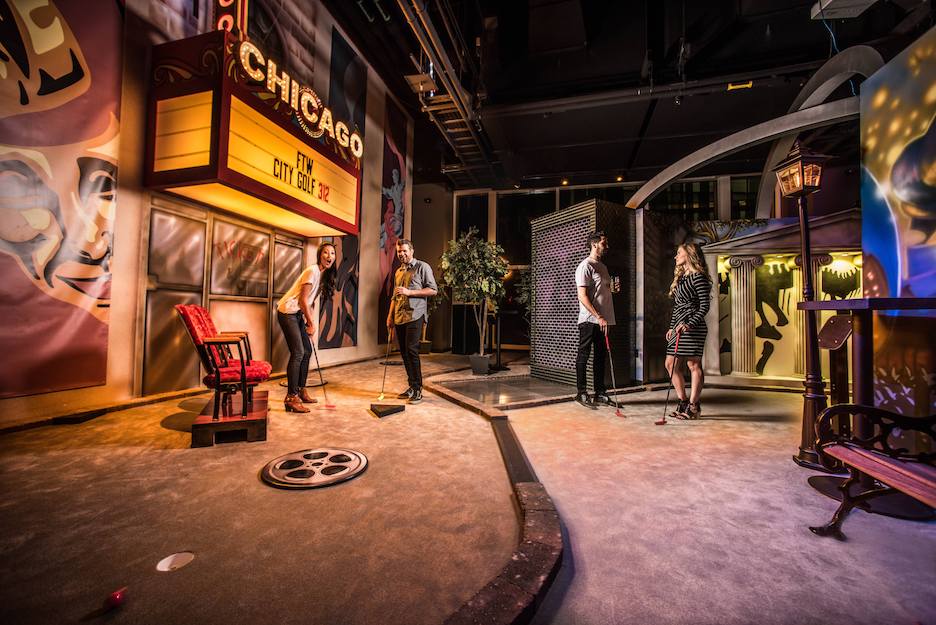 What do you get when you combine state-of-the-art gaming, neon lights and a miniature golf course? Well, you get FTW (or For The Win), of course. Test your skills on more than 130 games like skee ball, pinball, air hockey, Sega’s Showdown and a host of carnival classics. Take a break to select from 32 craft beers on tap, Victorian-inspired cocktails and comfort food like meatball sandwiches, wings and fish tacos. On Tuesdays, all games are half-price. Attached to Lucky Strike at 322 W. Illinois. ForTheWinEntertainment.com

Many Chicagoans are familiar with Cindy’s (and deservedly so), the popular rooftop establishment at the 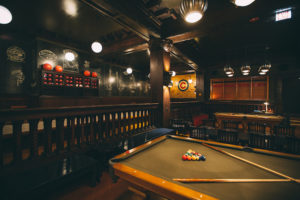 Chicago Athletic Association Hotel, but the lesser-known gem at the hotel is what they call the Game Room. Located on the second floor, the Game Room boasts pool tables, shuffleboard, foosball, chess, bocce ball, a full bar with exciting variations of classic cocktails, and comfortable, luxurious seating options. After the competitive fire dies out, head to the rooftop and enjoy a nightcap at Cindy’s while overlooking Millennium Park. 12 S. Michigan Ave., second floor. ChicagoAthleticHotel.com

10Pin Bowling Lounge combines America’s favorite participation sport with a hip, upscale environment. The 20,000-square-foot space, across from the House of Blues in Marina City, is furnished with plush sofas and lane-side tables. A total of 24 lanes are topped by eight HD video screens with nightclub-quality sound. All food, like specialty pizzas and Southern fried chicken, is served in small plate portions to encourage sharing. Wash it down with a signature martini from one of the two lounges. FYI — while family-friendly, you must be 21 years old to enter after 8 p.m. 330 N. State. 10PinChicago.com 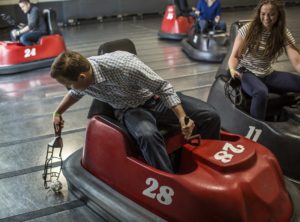 écor. On Tuesdays from 9 p.m.-close, it’s just $20 for all-you-can-bowl, and if you order food on weekdays between noon-2 p.m., bowling is on the house during that time. 322 E Illinois. BowlLuckyStrike.com

Chalk this up as a combination of activities you don’t see every day: Whirlyball is basically lacrosse meets bumper cars in a spectacular new 50,000 square-foot complex in the Bucktown neighborhood that also offers bowling, laser tag and an assortment of food and drink. 1825 W. Webster. Whirlyball.com