A Round of Drinks at Kingston Mines and The Green Mill: These classic Chicago music venues will keep you entertained all night long 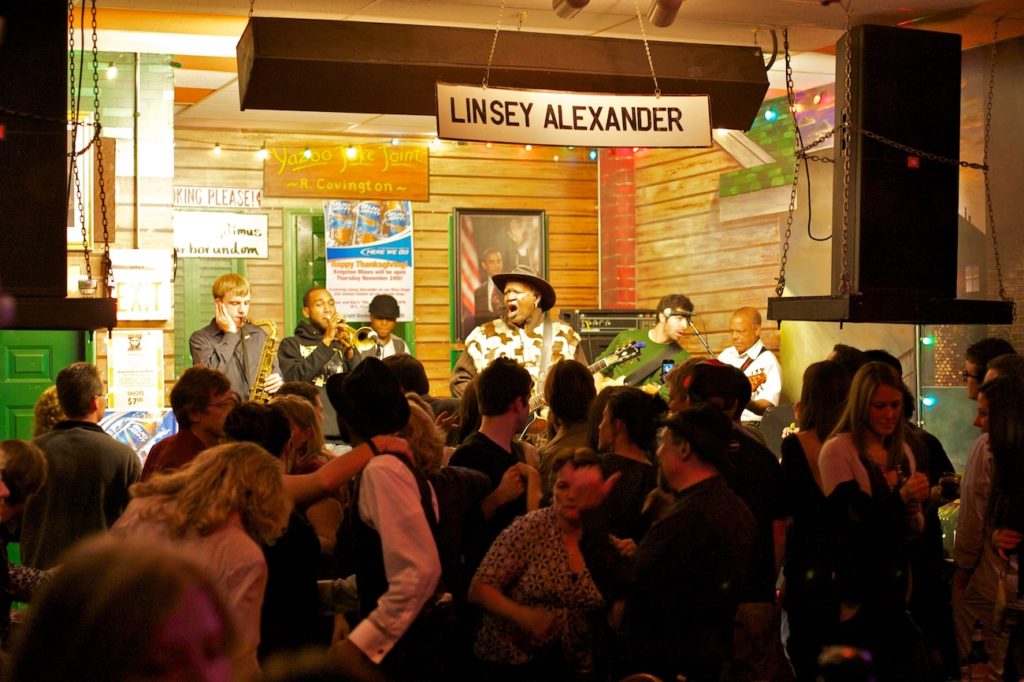 If you think the blues is dead, think again. And if you think jazz is dead, definitely think again. The Windy City has been at the forefront of each genre for decades and has some impressive clubs to show for it, many of which have become shrouded in local lore over the years. We chose to focus on two that continue to churn out good tunes and good times: the Green Mill Cocktail Lounge in Uptown and Kingston Mines in Lincoln Park. We caught up with Dave Jemilo, who has owned the Green Mill for 32 years, and Joanna Connor, a local legend in the blues scene and a regular performer at Kingston Mines.

The vibe: Kingston Mines, with walls painted with scenes of the Mississippi Delta and the feel of a log cabin with long, communal tables and sizeable dance floors, is every bit authentic. What are the blues, after all, if not no-frills and unpretentious? Kingston Mines has always been devoted to providing a good time on its two separate stages, pure and simple, and a relatively inexpensive good time at that.

“It’s always been a place that’s had really dynamic, intense and great music, and it’s always attracted a variety of people from all over the world.”

Reflecting on how Chicago’s blues scene has changed over the past few decades, popular singer/guitarist Joanna Connor commented: “The music itself is a little bit more open-minded; it’s not as straight-up blues. At the Mines, you’ll see more R&B, you’ll see more rock. It won’t be 100-percent blues, but that’s okay. A lot of it’s blues, but audiences now like to dance, and they like to listen to things they know, so you gotta mix it up a little bit more, but I don’t think that’s a bad thing.”

In their own words: “They have a unique concept,” says Connor. “Outside of Las Vegas and a handful of clubs around the country, most clubs don’t offer artists extended gigs like that.” Connor first began performing at Kingston Mines in the 1980s, before touring from 1989-2005, and then returning to Kingston Mines to play gigs on a regular weekly schedule once more. Certain elements have remained the same, she adds: “It’s always been a place that’s had really dynamic, intense and great music, and it’s always been a late-night club. It’s always attracted a variety of people from all over the world. 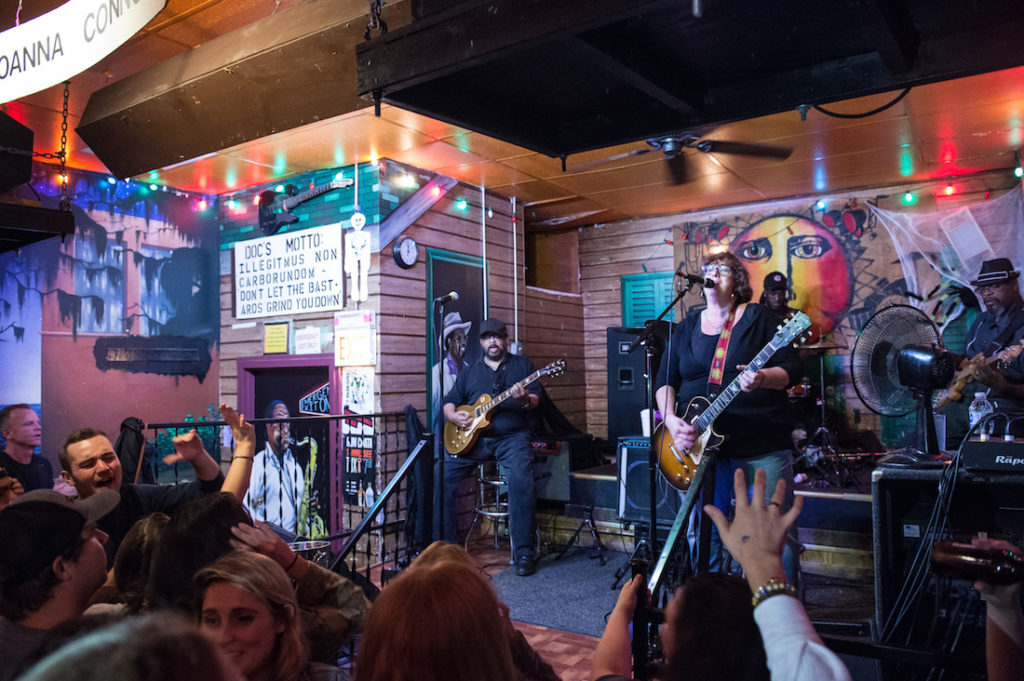 Fact and fiction: Kingston Mines is less than half the age of the Green Mill, but no less rich in history. Purchased by Dr. Lenin “Doc” Pellegrino — who passed away at 92 this May — in 1972, Kingston Mines quickly established itself as one of the city’s most respected blues clubs. And the giants of the blues scene weren’t the only musical greats to step through its hallowed doors: “Especially in the ’80s, there were a lot of rock stars who came through there,” recalls Connor. “I got to play with Jimmy Page there once. There are fewer of them coming, but back in the day, there were a lot — I met Mick Jagger, I met Aretha Franklin, I could go on and on.”

Blues clubs around the Windy City and the rest of the country have struggled some in recent years, but Kingston Mines is still going strong. “A good 50 percent of all the clubs that I’ve played at have closed,” says Connor, “so they’ve really accomplished something here that’s pretty rare.”

On the menu: Kingston Mines has an elaborate drink menu with tons of unique house beverages. Even when ordering a simple cocktail, like a mojito, one is confronted by a million varieties of rum with which it can be made. If you get hungry, Doc’s Rib Joint is open all night in the back with a Southern-style menu ranging from po’ boys and barbecue to late-night cravings like mac and cheese and chicken strips. The quality and quantity of the menu is a bonus you won’t find at most music venues.

When to go: For Connor, every night has the potential to be an explosive performance: “You never know what’s going to happen,” she says. “You could have a random Tuesday night that’s incredible. But I’d say mostly Friday or Saturday nights after 11:00, when the younger crowd comes through — no disrespect to people my age, but they’re a little bit too laid back for me. Once it gets later, it’s a lot more fun.” 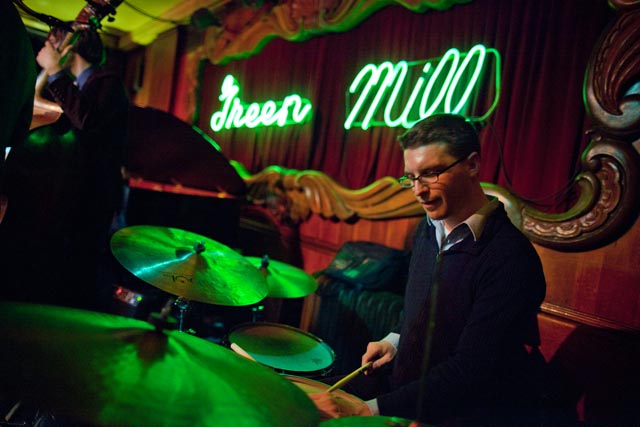 The vibe: From the moment you walk in beneath the classic neon sign, the Green Mill is as cool as could be. Some nights, it’s like stepping into another dimension, as you watch hipsters in vintage garb skillfully swing dance the night away. Other nights, bartenders politely ask you to keep your voice down as you enter, and the club is packed with folks from all over Chicago who have come to hear some of the most talented jazz musicians in the world. A soft pink glow pervades the Green Mill, and vinyl booths line the interior — Al Capone famously preferred the booth in the middle of the club that allowed him to keep an eye on both entrances at once, even though its back is to the stage.

Under Jemilo’s ownership, the Green Mill has remained classy and classic. “For the last 32 years, it hasn’t changed much,” he says. “Sometimes, I gotta raise the prices a little bit, but we still have dial telephones, we still don’t have any internet, still the same cash registers, no computers, no nothing. Just the same — nothing has changed, not much, [although] I did remodel the bathrooms last year.”

Upon taking over the Green Mill in 1986, Jemilo discovered bootleggers’ tunnels used to smuggle alcohol in and out of the club.

In their own words: “Partly, it’s special because there’s history. It has a good look. There’s great music,” explains Jemilo. But more importantly, “If you’re a customer, you’re getting more than your money’s worth, because we don’t charge too much money, and we make things properly. … I think people like that they’re not going into some slick, corporate-run joint that’s overpriced, with bartenders with f–king egos. It’s just a normal place.” 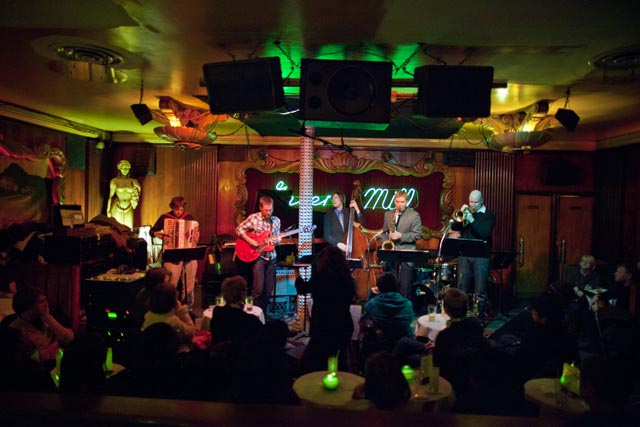 Fact and fiction: The Green Mill opened as Pop Morse’s Roadhouse in 1907 before taking its current name in 1910. In the following decades, it hosted a variety of celebrities — not only musical stars like Billie Holiday, but Prohibition-era gangsters like Al Capone. Upon taking over the the Green Mill in 1986, Jemilo discovered bootleggers’ tunnels used to smuggle alcohol in and out of the club, although contrary to popular belief, the tunnels do not lead all the way to the lake, culminating in a trap door buried by sand.

The club declined throughout the middle of the 20th century; evidence lies a bullet hole in the vestibule from a drug deal gone wrong in the 1970s, according to Jemilo. When he bought the Green Mill, “the place was a dump. … (People) would be passed out on the floor, and there would be guys shooting up heroin in the corner. It was a really rough joint.”

Under Jemilo’s ownership, the Green Mill cleaned up its act, reclaiming respect as a venue. “Bud Freeman — he used to play at the joint in the ’80s. He started out (in the) 1920s. I tell young guys now that play here, ‘Oh yeah, Bud Freeman used to play here,’ and they freak out, because they read about him in history books.” The Green Mill was also the site of some of the earliest slam poetry.

On the menu: The Green Mill’s drink menu is small, and its food menu is nonexistent. Think basic beer and classic cocktails, served by well-dressed bartenders. The philosophy is simple: Grab a few drinks and listen to the music. If that’s not what you’re looking for, well, the door’s over there.

When to go: Jemilo says his favorite time to go to the Green Mill is “Sunday at 11:00 at night. The Joel Paterson Trio (performing from) behind the bar is the coolest thing going.”

The rise of the Boka Restaurant Group: ...