First Look review: The Goodman’s “Support Group for Men” is comedic therapy for navigating through what it means to be a man in today’s America 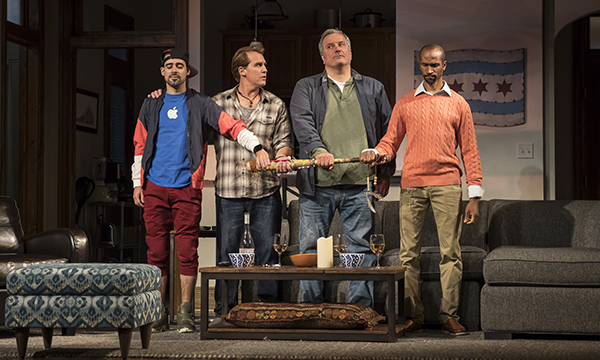 Basic storyline: Every Thursday night, a group of middle-aged pals gather at a Wrigleyville apartment to talk and offer support to one another about the things in their lives that weigh heavily on them. After witnessing a bar fight in the alleyway below the apartment, the group adds an unexpected member that pushes them to grow, question some of their own inner struggles, and come to grips with a new concept of what it means to be a man in today’s America.

What stood out: The ensemble of this show is rock solid. The play centers around four men (Anthony Irons, Keith Kupferer, Ryan Kitley, and Tommy Rivera-Vega) who work off each other like a well-rehearsed improv troupe. Helped by the fact that the characters are written (by esteemed TV and stage writer Ellen Fairley) to be so well-rounded and fleshed out, it sets up for a wonderfully enjoyable comedic backdrop for the show. I don’t think there is a joke that didn’t land.

The characters are written to be so well-rounded and fleshed out, it sets up for a wonderfully enjoyable comedic backdrop for the show.

On another note, I think I may go out of my way to see every Goodman show going forward, simply to see the set design (in this instance, a legitimate one-bedroom Chicago apartment). Their sets are routinely beautiful enough to justify getting there early just to sit in the audience and admire them. It’s like staring at a piece of art you enjoy, except with the added bonus that you are going to get to see this piece of art come to life. Actors are going to play on it. It’s going to express functionality. It may even come to life itself. Here, it’s true what they say about the set being its own character.

Final thoughts: The show is very enjoyable, holding a very whimsical, fun tone while also tackling themes and ideas that are very prevalent to many Chicagoan ideologies. Some of the subject matter I could relate to easily, which made the show even more engaging. It’s difficult to really get into the meat of the themes without spoiling the play, so my advice is to just go and see it. Chances are it will amuse and entertain — and leave you pondering a man’s role in our ever-changing society.