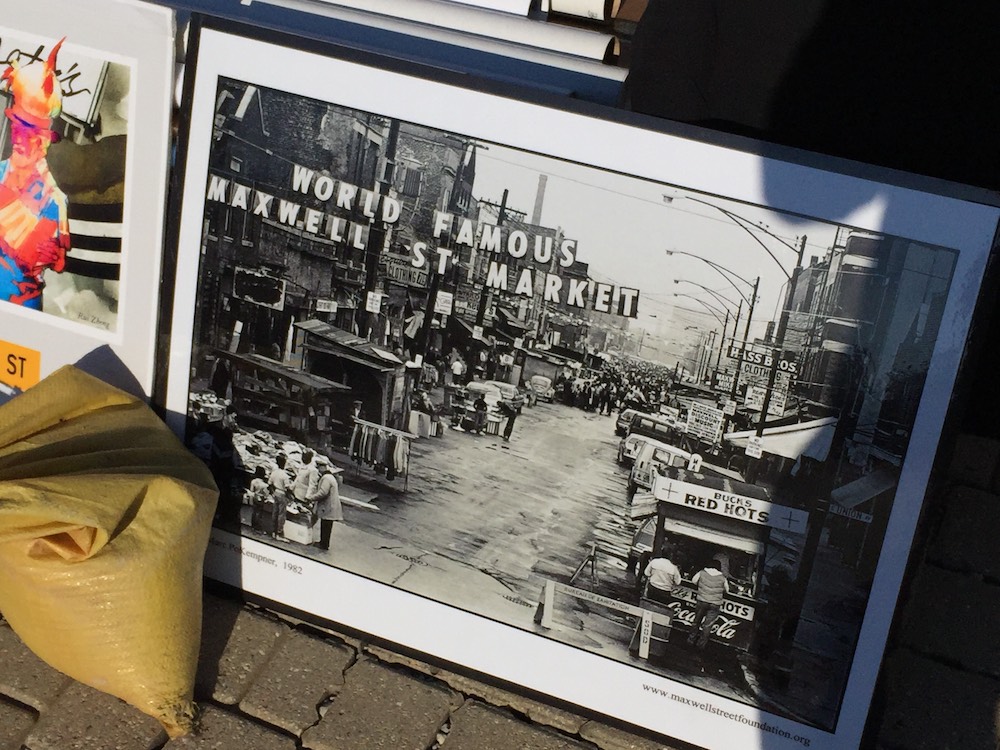 Six in the morning is too early for anything. For a half an hour after my alarm went off, I tried to claw my way back into sleep’s warm cradle before I tore myself out of bed and stumbled into the Uber that was going to take me to the Maxwell Street Market. I hadn’t even shut the Uber’s door before the driver (a stone-faced man named Jason) jammed the gas pedal and launched us down the street to the tune of “Safety Dance.” As I said, 6:00 in the morning is too early for anything, especially a jump to hyperspace on a Chicago street set to the world’s most irritatingly optimistic ’80s song, so when Jason let me out at the corner of Des Plaines and Taylor Street, I was in an understandably touchy mood.

As I walked toward the market situated a few blocks down the closed-off road, I glanced at the street signs: Polk Street, Taylor Street, Harrison Street — a whole slew of presidential names, but not a single sign of the more plebeian name, Maxwell. The supposedly famous Chicago attraction puzzled me. It seemed to be disintegrating. Tents stood solitary and scattered from the main bunching of merchants like afterthoughts that had expected to have less space for their wares. Much of the blocked-off segment of Des Plaines went unused, and weary-looking security guards stood lonely at roadblocks some 50 feet away from the actual market.

I arrived as the vendors were still setting up. The air smelled like old plastic, warm bread and leather. Deeply creased faces pitched tents and sorted merchandise, while bouncing children rushed from truck to tent carting piles of hats, jewelry, tortillas, VCR movies, office supplies, prayer candles, rusted tools and fidget spinners. I reached into my back pocket and found that my 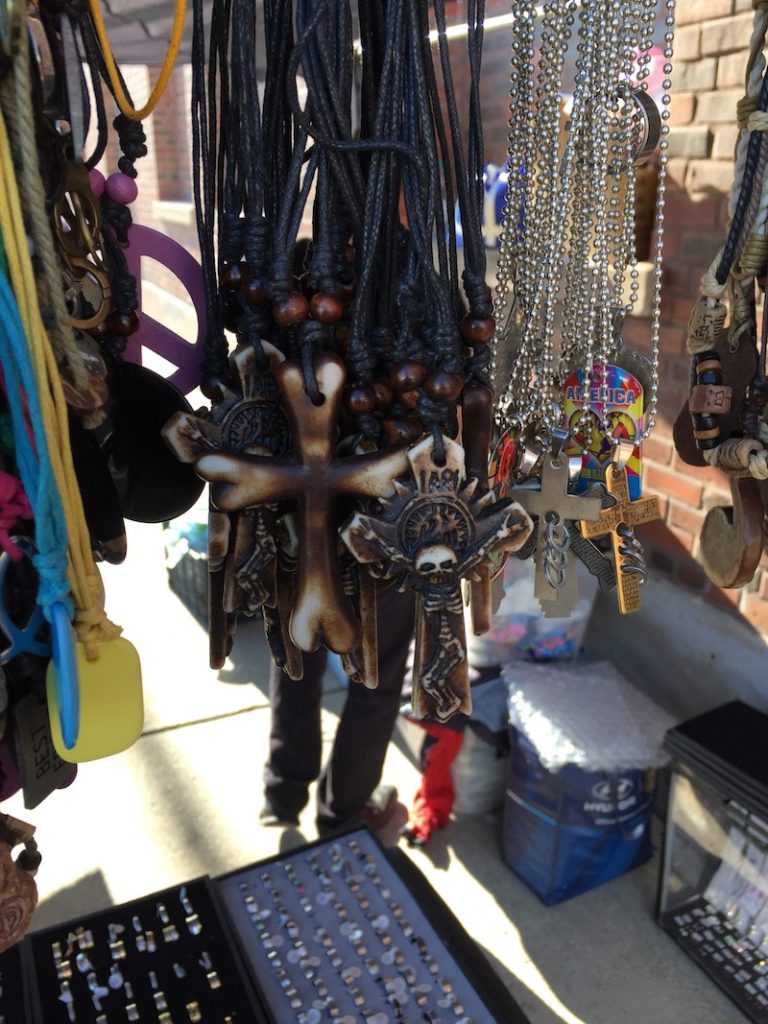 trusty note pad had mysteriously disappeared, but when I glanced up there was an orderly stack of similar note pads on a table in front of me. I was standing in front of a school supplies tent. A slight woman with a tired smile sold me a pad for a dollar and told me a little about the market. I was surprised to learn that the woman didn’t live in Chicago and made the trip from Indiana every Sunday to sell her pens, pencils, paper and superhero erasers, but I was most struck by something that at first seemed obvious — her busiest time of the year was before school started. I had been looking at the market as a mere curiosity, but for many of the eclectic faces and accents that floated through the Maxwell Street Market, it was a necessity. It was where they bought their groceries, clothes and tools — all of life’s needs.

The streets and buildings that loomed around Des Plaines were snobbishly quiet at 7:00 in the morning. A distant Mariano’s accepted a trickle of scowling faces who turned up their noses at the wafts of taco-flavored smoke that billowed out of the sweaty tents, but the market was unfazed. At the center of the market was a small table overseen by a lean-looking man with slight flecks of paint on his cheeks from whatever job he had recently come from. At the foot of the table was a black-and-white picture of a massive street market that dwarfed the gathering of tents around me. I asked the man if that was what the Maxwell Street Market looked like when it was still on Maxwell Street, and he gave me a sad nod.

Peter remained hopeful, claiming “the market will never disappear as long as you got cultural spirit.”

The man’s name was Peter Pero, and he was a board member of the Maxwell Street Foundation. He explained to me that if the market looked like it was degenerating, that’s because it was. The picture was of the market in its glory days during the early 1900s, when it had nearly 200 vendors. Now, after having its location changed twice, the amount of venders at the market was down to 50. Peter remained hopeful, however, claiming “the market will never disappear as long as you got cultural spirit.”

I thanked him and shook his hand.

As I explored the different stalls and tents, I listened to the babble of conversation all around me:

“It’s a good watch, made in Germany!”

“How much for five of those fidget spinner things?”

And of course, “Hot tacos for sale!”

It was the last exclamation that I elected to follow, and the cry for homemade tacos led me to Rubi’s. Praised by both the Chicago Tribune and the mayor, Rahm Emanuel, the famous Rubi’s had a line that made a dam in the flow of people. I waited for my taco and studied the scene around me thinking about Peter Pero, the Mariano’s down the road, the people shoppi 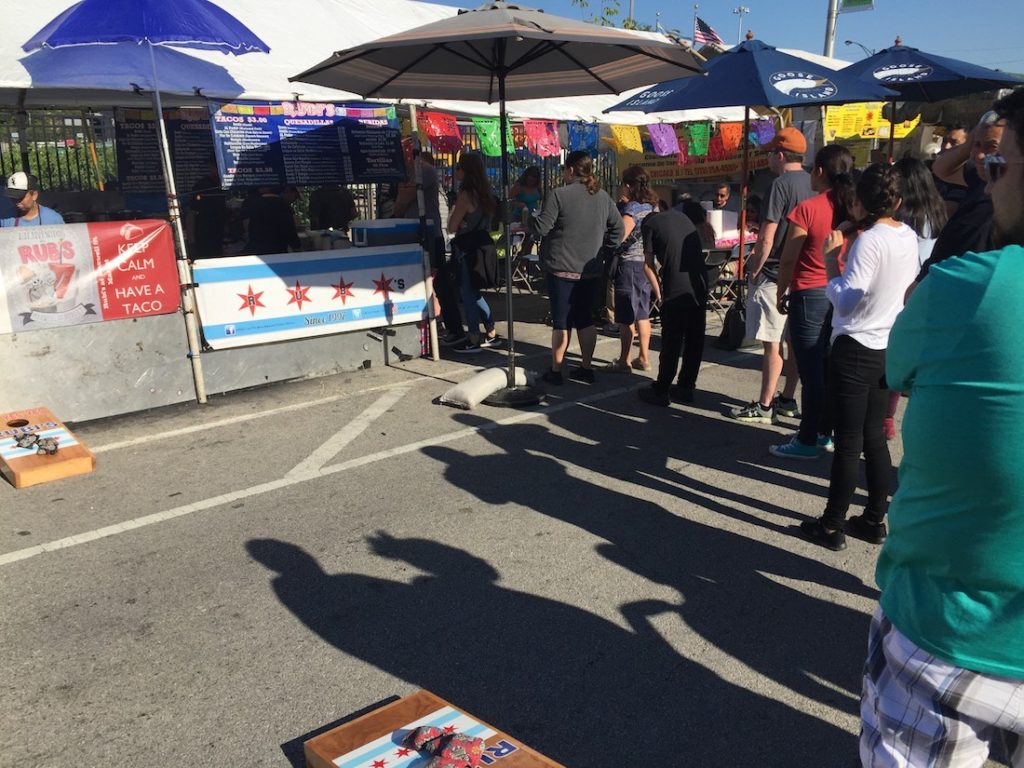 ng for groceries, and the vast amounts of fidget spinners that seemed to have a place at every tent and booth. There was a feeling I couldn’t shake about the market. Something sad and prophetic.

An open-air market is an epicenter for community. I stood eating my taco and studying the characters of this community: a cop playing with a fidget spinner, a red-cheeked Hispanic man merrily cutting meat and yelling for customers, a hatchet-faced tool merchant who with a single flick of his wrist snapped open a knife to impress his friends. The scene was both threatening and friendly, wild and organized, utterly strange, but undoubtedly human.

I left the market and started to walk toward the Loop. After a few minutes I came to a tall white church with a line of well-dressed folks streaming into it. Outside of the church was a quivering and hunched man asking for change. Churchgoer after churchgoer passed the panhandler with downcast eyes and hands firmly grasping their wallets. A little annoyed by the cynically ironic spectacle, I held out a dollar to the man.

“Looking for this?” I asked.

He took the dollar. “Naw man, I’m looking for God.”

I pointed to the church, “There he is.”

The homeless guy started to laugh, “Oh no, God is everywhere, brother. In the streets.”

The Maxwell Street Market is a strange and dying beast. It is being kept alive by those people who rely on it for the needs of daily life and the few who just have blind faith in the power of community. The market can be an abrasive experience, where venders might try to upsell you and the stacks of fidget spinners might just be stolen, but like looking for God, if you want to really discover Chicago culture, look to the streets.

Summer specialties: Where are you most looking ...