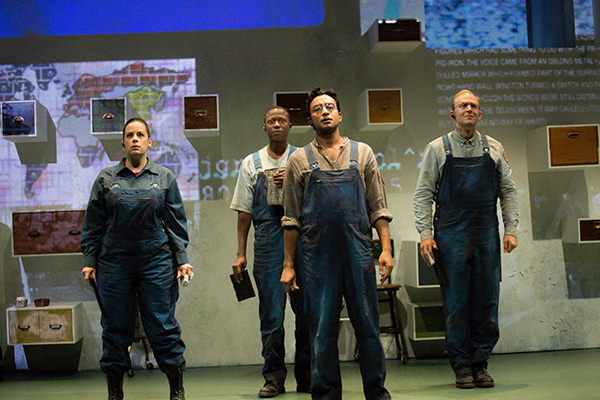 Basic storyline: Talk about Back to the Future! Steppenwolf Theatre’s talented ensemble takes us back to 1984, 31 years in the past but some 66 years after George Orwell’s famous novel was originally written. Protagonist Winston Smith lives in Oceania, where the citizens of this war-torn, dystopian society are ruled under a totalitarian government led by the watchful eye of “Big Brother.” 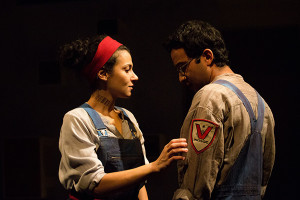 Winston works for the Ministry of Truth, where he and his co-workers rewrite news articles so that history always supports the ruling party’s views. In time, however, Winston comes to reject the party and looks to join the secret rebellion against Big Brother. Winston is approached by a female co-worker named Julia, and the two start a romance — as well as a movement to fight the oppressive establishment. But in a world where no one can trust one another, the two rebels are soon caught in a trap set up by an inner-party member named O’Brien. Both are arrested for “thought crime” and taken away for torture and brainwashing. What remains is the battle between the power of evil and human will.

What stood out: The set design is at first minimalistic and cold, but repeatedly becomes bombarded by harsh visual projections that leave the audience mentally drained but with an accurate feeling of what life might feel like, in the future, 31 years ago.

Final thoughts: Can you imagine a society where people are constantly bombarded by digital imagery and information, where video cameras are seemingly everywhere, and people are careful when speaking so as not to offend the wrong group, the climate is oddly warm and access to coffee is extremely rare? With the exception of our never-ending supply of coffeehouses, one cannot help but see some similarities in Orwell’s vision and the world we live in today. There is no intermission, the performance is powerful and the visuals are intense, so prepare to be mentally tested. And always remember: Big Brother is watching.

My Chicago: What is your go-to restaurant ...