We Ask, They Answer: Q&A with the Evanston band Manwolves on making music, navigating Chicago, and being too young for the Green Room 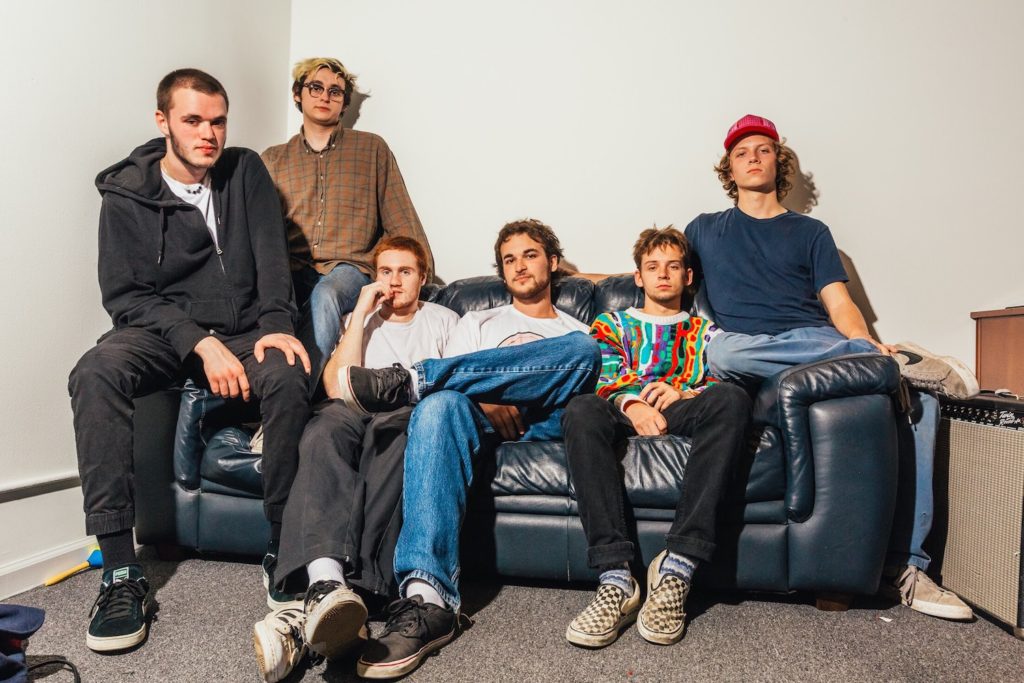 Though the members of Evanston’s jazz-meets-hip-hop band Manwolves are less than two years out of high school, they’re no strangers to selling out some of Chicago’s most popular venues. This January, they added Subterranean to that list in a show with some of Chicago’s most exciting up-and-comers. All the members of Manwolves — Jamie McNear (vocals), Ari Garfin (keyboard), Eli Cohen (guitar), Henry Wolf (bass), Julian Freeman (drums) and Michael Werner (trumpet) — have been friends since middle school. They’ve released a steady stream of singles over the past few years, from which they’ve gained a strong local following, and a burgeoning fan base nationwide.

I had a chance to catch up with singer Jamie McNear to discuss the band’s roots, their plans for the future and their feelings about Chicago. Though they aren’t playing many shows in the Chicago area at the moment, McNear hinted at a big project of theirs to be released soon as well as a new music video that dropped Feb. 19.

The Real Chicago: You guys have all been friends since middle school. Was music a part of your friendship from the beginning, or did that play into it later?

McNear: We all played music, our own respective instruments: I started off playing guitar; Julian played the saxophone, he was always drumming though; Eli plays guitar, he always played piano. In our friend group, we started a whole bunch of little bands, but it was mostly because we were friends. Music, I guess you could say, was a part of it from the get-go because all of us were playing music, but it was once we started what is Manwolves now, that we were like, “Alright, we could actually do some stuff with this, take it seriously.” Not saying we weren’t always taking music seriously though.

The Real Chicago: Was staying together after graduation and making music as Manwolves always the goal during high school, or did that come about a little bit later?

McNear: Everyone in the beginning of high school had their own plans. People wanted to go to college, some people were trying to pursue their own dreams aside from music. And when we really started playing music with the help of our mentor, Jim Tullio, who’s a long-time producer based in Evanston, we were recording music with him, and he was like, “You guys actually have a shot at this.” … So the latter half of high school, we started thinking more towards music than towards going to college and pursuing these other ideas, and really gave music a shot. And now we’re two years out, still doing it, and it’s working great for us. We love it. Once we really got into the band, we were like, “Man, music should be the way to go.”

The Real Chicago: Can you tell me a little bit about the name Manwolves? How did you guys come up with that?

McNear: When I was a little kid — have you ever seen the movie An American Werewolf in London? It’s a cheesy ’80s horror film, it’s not that great. I saw it when I was a kid, and it freaked me out. So my mom told me stories of “manwolves” to make fun of it and lessen the impact of it on me because I would get nightmares. And then, fast-forward a couple years, when we were in middle school, we had a friend group of all of us hanging out, like 20 kids or whatever, and I, for some reason, wanted to give it a name, so I called it the Midwest Manwolves. And then once we started the band and were looking for names — okay, why not the Midwest Manwolves? And we were like, “Midwest is kind of lame, so what about Manwolves?” So we stuck with Manwolves. At first, some people were against it, but a majority of the people, like I was, were really for it, like, “Yeah, that could really work!” And now it’s just stuck. It’s a unique name, too; people are always confused when they hear it, like, “Manwolves? Like Werewolves?” Yeah, but Man!

“You can definitely see the stuff that we grew up listening to influencing us, all the rappers like Chance, Vic [Mensa], Kanye West, all those people from Chicago. Nothing was too straightforward that we were pulling from. … It was just us doing us, and it was the product of our gumbo pot of listening material.”

The Real Chicago: So are you guys still living up in Evanston these days?

McNear: Only two of us are left in Evanston, me and the guitar player (Eli Cohen). Everybody else moved down to Chicago, living in Rogers Park area.

The Real Chicago: Do you guys think growing up just outside Chicago has influenced your style at all?

McNear: Looking into Chicago, the big city, so much was going on that we really enjoyed. So there’s definitely some that could have influenced us deeply. Evanston was a little weird. The music scene was a little sparse, and people are more interested in going to football games than seeing a live show most of the time, so the Chicago scene really accepted us. You can definitely see the stuff that we grew up listening to influencing us, all the rappers like Chance, Vic [Mensa], Kanye West, all those people from Chicago. Nothing was too straightforward that we were pulling from; it was just kind of subconsciously put into our music. We never sat down to make our music like, “We should sound like these folks.” It was just us doing us, and it was the product of our gumbo pot of listening material. 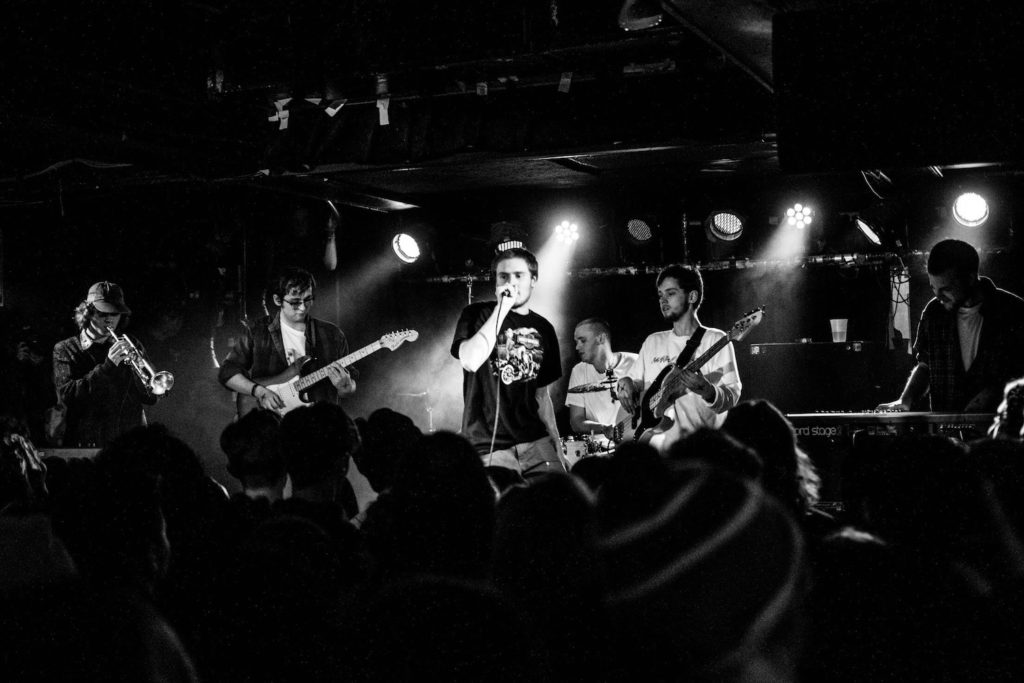 The Real Chicago: You guys have played a lot of shows with other local up-and-comers like Ravyn Lenae, Ric Wilson and Thelonious Martin. Is there anyone else coming up in Chicago who you’re really excited about?

McNear: We’ve got a bunch of friends who we’re excited to see blow up. A band called The Slaps — they just released some new music, they’re really good, and we’d love to see them get more exposure. Iris Temple, the Burns Twins, KAINA, Ric Wilson, all these people who are good friends of ours and make good music, we’d love to see them make it big.

The Real Chicago: What are some of your favorite venues to play in Chicago?

McNear: Schubas is pretty good, Subterranean is fun, Metro is fun, the one time we played House of Blues was pretty cool. Martyrs’ was always good; when we were first starting, they showed a lot of love to us. We haven’t had any complaints about places we’ve played in Chicago. Everywhere that’s had us is pretty nice.

“We’re young, so we get looked at strangely. … The owners would be confused, and the bartenders and people would make jokes like, ‘Are you even old enough to be in here?'”

The Real Chicago: Is it weird being in any of these venues that, legally, you guys aren’t old enough to be in otherwise?

McNear: Yeah, it is kind of weird. We’re young, so we get looked at strangely. It was more in the beginning of our musical career that that was more prevalent, because we’d play shows and 17- and 18-year-olds would walk in, and the owners would be confused, and the bartenders and people would make jokes like, “Are you even old enough to be in here?” It would be our show, and security would be like, “Oh yeah, you don’t get green room access because you’re under 21, and there’s beer in the fridge in the green room.” And we’d be like, “It’s our show! What do you mean?” But it is funny, and it is weird because it’s art, so there’s no age cap or age starting point that you’re supposed to do it at. It’s fun for us being this young and touring, as people are still like, “Here are some kids,” but we’re not just kids, we’re professionals.

The Real Chicago: It’s a regular Saturday night in Chicago. Where are we going to find you guys?

McNear: Well, right now, a majority of the time, because it’s winter, we’re not going out too much. We’re staying around the North Side if you see us. Sometimes we go down to Wicker Park and hang out. F–king J.B. Alberto’s — love going there, getting a slice. Sometimes we go downtown. Mostly we’re just hanging out at a friend’s house, or our own houses, all that. But once the summer hits, you can see us at the beach and all that — all the nice places that you would go in the summer.

The Real Chicago: Maybe not this time of year, but do you guys have any favorite skate parks in Chicago or Evanston?

McNear: Yeah, me and Michael, we’re the avid skateboarders in the band, and we like to go to Grant downtown. Logan Skate Park is also pretty cool, except someone stole the rail there. I don’t know if it’s back, I mean, it happens, I guess. We sometimes go out west to Niles (Washington Terrace Park on Dempster). Love going there; that shit is cool. Also, there’s this little tiny skate park that I always go to called the Lincolnwood Skate Park, but we’ll also skate streets, go cruise around parts of town and just skate what we can find until we get kicked out.

The Real Chicago: I gotta ask — between you and Michael, who shreds harder?

McNear: You know, I’d probably give it to Michael. I’m out of practice a little bit. I can do more flat-ground tricks and stuff like that, and I feel like I jump down higher stuff sometimes, but I haven’t done that in a long time. He’s really good at vert, and he’s really tech on ledge, so I guess I gotta give the medal to that man right there, Michael.

The Real Chicago: Getting back to the music, you guys released a stream of singles over the past few years, but you’ve been pretty quiet about plans for upcoming albums. Can we expect any big releases from you guys in the near future?

McNear: Yeah, this first half of 2018, you can expect a new project from us coming out soon. A new single, a new project, and we’re about to have “Shreddy” (“Shreddy Krueger”) as our second music video on Feb. 19.

The Real Chicago: Do you guys feel like with any of your new music that you’re experimenting or changing directions at all, or are you sticking to the same path?

McNear: Definitely still Manwolves. We’re always trying to expand and grow in any way possible, really fit into our pockets what we think we can do best. Hearing it, you’ll definitely say it’s Manwolves, but it’s a newer sound. It’s definitely more mature, more advanced in a way.