First Look review: The entertaining “Lottery Day” at the Goodman Theatre holds a magnifying glass to Chicago, revealing both pleasures and problems

Basic storyline: Lottery Day marks the bittersweet conclusion to Ike Holter’s seven-part “Rightlynd Saga,” set in the fictitious but all too recognizable Chicago ward of Rightlynd, where residents are caught up in the wave of gentrification that is sweeping through their neighborhood. Audiences who are familiar with any of the six previous plays will be delighted to find some of their favorite Rightlynders gathered for a backyard barbeque during the waning days of summer.

For newcomers like myself, the hodgepodge of characters nevertheless becomes unjumbled quickly enough. Rightlynd friends of various generations and various fortunes mix with more recent imports, like the owner of the new storefront theatre and the vice principal of the recently closed local high school, and even the clueless real estate developer who has moved in next door, bringing her slew of personal problems with her.

The host of the party is the witty and lovable (if sometimes harsh) Mallory, the matriarch of the neighborhood who is still privately coping with the loss of her husband and daughter to a robbery gone wrong a few years earlier.

But Mallory’s shindig is more than just a feel-good barbecue with lots of meat, lots of booze, and lots of weed — it’s also a series of competitions for a lump sum of cash (hence, “Lottery Day”). Unbeknownst to her guests, however, Mallory has put $50,000 of life insurance money into this year’s jackpot. As the Rightlynd friends alternatively compete, give up, converse and compete again, it becomes increasingly clear that the lives they used to lead are slipping beyond their reach, and no amount of money or good feelings will reverse the tide. Where this leaves the motley crew of Chicagoans is as ambiguous to them as it is to us. The characters are as much fun to watch as the issues they deal with are real and complex.

The qualities of theater, as opposed to other forms of art, make it uniquely suited for blurring the boundaries between art and life. Lottery Day does this particularly well.

What stood out: For the most part, Lottery Day avoids becoming didactic and heavy-handed. The audience is left to enjoy the interplay of the characters, and use the play, which offers no clear-cut solutions to issues of gentrification and nostalgia, as a starting point for further discourse. Sure, there are occasional moments when characters seem to ventriloquize larger themes (“The neighborhood doesn’t change people; people change the neighborhood.”) or begin to 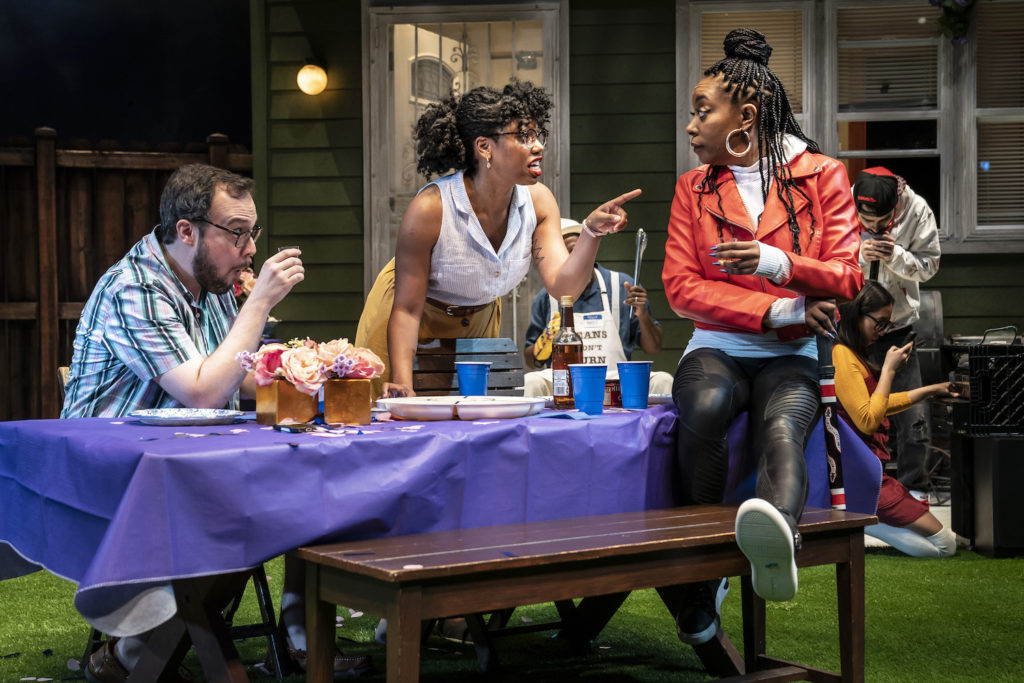 look more like caricatures (the North Side real estate developer is dressed in a bizarre combination of athleisure and fancy work clothes). But on the whole, Lottery Day avoids trafficking in the kind of liberal sentimentality that confounds systemic problems; it does not suggest, for example, that if we could all understand that special feeling of “home” and stop trying to “improve” neighborhoods, everything would be alright. Nor does the play indulge in overly simplistic race and class politics.

Lottery Day has a finger on the pulse of the real Chicago, and the city shines through all aspects of the play, perhaps most visibly in humorous lines about how Wicker Park used to be “shady as hell” and in many invectives directed at former mayor Rahm Emanuel.

Final thoughts: The renowned art historian and critic Michael Fried remarked that the qualities of theater, as opposed to other forms of art, make it uniquely suited for blurring the boundaries between art and life. Lottery Day does this particularly well. Certainly, as characters amble around the stage during the live intermission, it becomes impossible to distinguish whether it is the characters or the cast members chatting with each other. But more to the point, Lottery Day is the kind of play that extends well beyond the walls of the theatre.

As I exited into the Loop, stared out the windows of the Jackson Park Express bus and climbed the quintessential rickety wooden staircase behind my apartment, I couldn’t escape the grips of Lottery Day, or at least the burden of Rightlynd’s problems, which reverberate through every inch of this city and all of its residents.

Shop Around the Corner: Homemade jeans and ...