We Ask, They Answer: Q&A with The Orwells on starting out in music, favorite Chicago venues and Australian wildlife 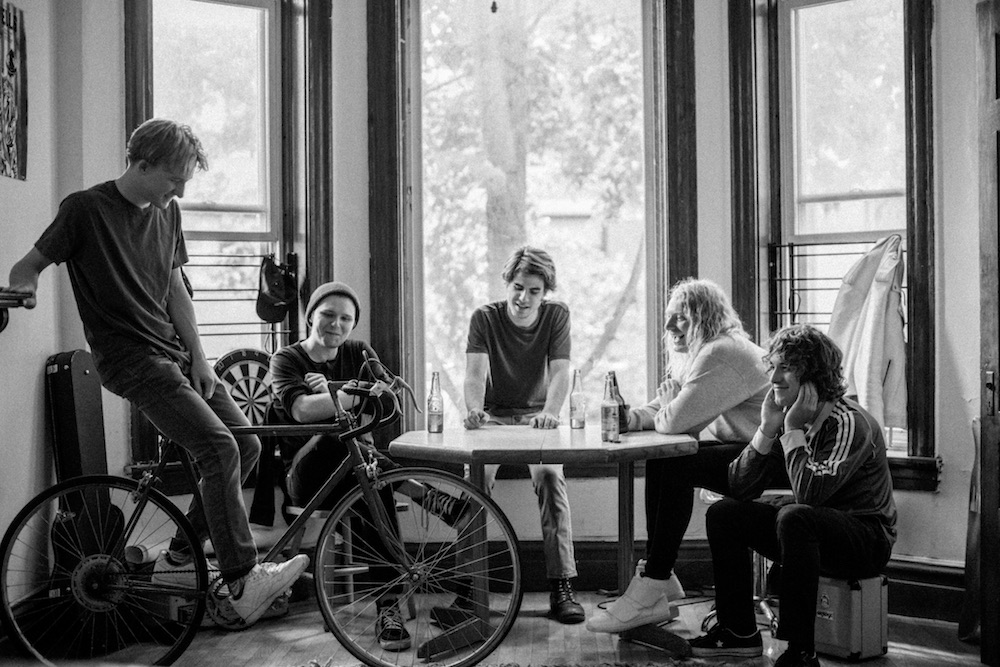 The Orwells started playing together at York High School in suburban Elmhurst. Singer Mario Cuomo and guitarist Dominic Corso are cousins, Grant (bass) and Henry Brinner (drums) are brothers, and guitarist Matt O’Keefe has grown up with the rest of the guys for years. They were discovered in 2011 and graduated high school early to pursue their music careers. Since then, they’ve been on David Letterman, toured with the Artic Monkeys and performed at Lollapalooza.

I started listening to The Orwells when I was in high school after a friend of mine blasted “Mallrats” through the speakers of my beat-up ’97 Saturn. It wasn’t until Disgraceland came out in 2014 that I realized they were from the Chicago area, and near where I grew up. Their performance this past March at the Metro was one of my best concert experiences so far. In addition to seeing The Orwells this summer at Riot Fest, I also got the chance to talk to Matt O’Keefe after their set and follow up with him and Mario while they were on tour in Australia.

The Real Chicago: You guys played “Steady As She Goes” at Riot Fest, and you also played it at the Metro in March. Why did you guys pick that song? How do you generally choose which songs to cover?

Matt O’Keefe: Yeah, one day Mario said we should try playing it. It sounds close to our other songs, like rip-off close, so it makes sense.

Mario Cuomo: Yeah, when it’s easy to go into another song for whatever reason, like the chords line up or whatever, it’s something we like to do. We used to do a similar thing with “Halloween All Year” and “Build Me Up Buttercup.” The end of a few of our songs and the intro to the others just go together well, and it’s a fun thing to do. It’s not like a full-blown cover, but it’s a fun thing for everybody.

The Real Chicago: Is there a reason you call them ripoffs? I’ve noticed you call your covers that on some of your earlier albums.

O’Keefe: Yeah, it’s a technique we enjoy. Just like, taking it and playing it like we wrote it. 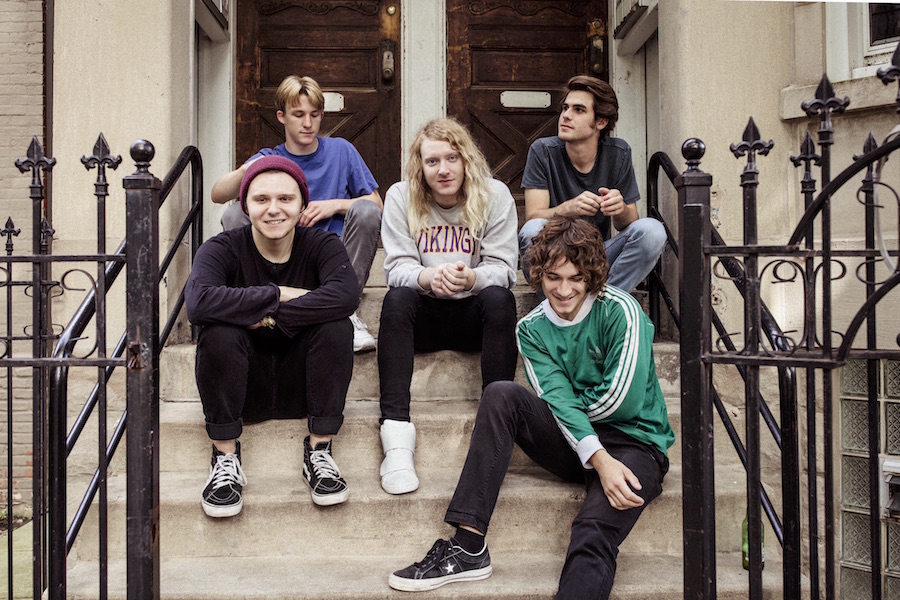 The Real Chicago: What is the first venue you guys booked in Chicago?

O’Keefe: First time downtown was Subterranean actually. We played a sold-out Subterranean show because my brother’s girlfriend’s band was playing and she let us open for them. So our first show in the city was a sellout at the Sub-T.

The Real Chicago: What about your favorite venue to play in Chicago?

O’Keefe: I don’t know. You can’t really compare something like Schubas to the Metro, you know? But I guess I would maybe say Schubas. I do really love Schubas. The sound is really cool. It’s tight.

O’Keefe: Yeah, Schubas and the Metro. Our last show there was really fun.

The Real Chicago: How do you think growing up in the Chicago suburbs has influenced your music?

O’Keefe: I don’t know what the suburbs did for us. We were probably a little less influenced by any sort of scene in Chicago. It let us develop ourselves and have a little bit of a different sound I guess.

If you play at a smaller show that somebody’s willing to throw 20 bones down for … they probably already like you enough where you can be more comfortable. You can get away with more. Where like at a fest, you’re kind of more naked.

The Real Chicago: Do you guys have any restaurants you have to hit when you’re in town?

O’Keefe: Tefano’s Pub down in University Village or Pilsen or something. You can get some nice ravioli down there.

The Real Chicago: Have you been listening to any local bands?

O’Keefe: Not really. I’m not trying to say anything about the local scene here, but I haven’t been (listening) recently. I mean, obviously, The Walters and Twin Peaks, Post Animal, that kind of stuff, but nothing up and coming that I’m aware of.

The Real Chicago: How did you guys meet FIDLAR and The Walters?

O’Keefe: The Walters are just… we’re just friends. And FIDLAR, I don’t really know. We toured with them like three years ago. How did that happen? 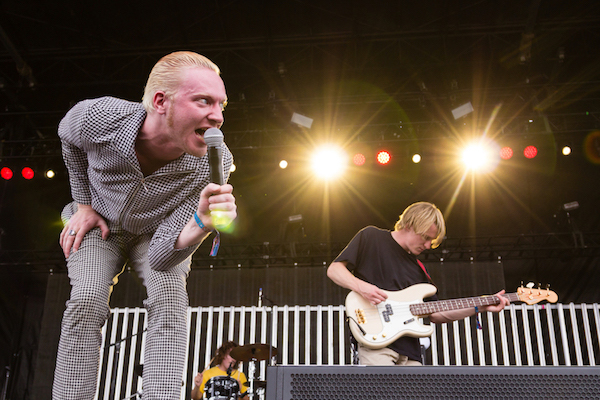 Cuomo: We just liked their videos and shit. And we were just eating lunch in high school, and we were like, “It’d be cool to play with them.” And I don’t know… was it SXSW?

O’Keefe: I think that was it. We were at SXSW one year, and we met this girl and we were talking about FIDLAR, and she was like, “Yeah, I know them.” And to us it was a mind-blowing thing, we thought they were like this untouchable group, you know, size wise. I don’t think we had a good grasp on that situation. But then she ended up running into them at a coffee shop or somewhere and mentioned us, and they got in touch so we jumped on a tour with them.

The Real Chicago: Are you liking Australia so far?

O’Keefe: Yeah, it’s pretty cool. There aren’t any, like, cool animals yet though, so that’s kind of a bummer. We saw two moths. (Matt starts laughing in the background). They were kinda small.

Matt: (Recovering from his laugher) Yeah, they were little guys.

The Real Chicago: How is playing at a festival different than playing a small show?

O’Keefe: I guess it’s maybe not as easy I guess.

The Real Chicago: Why?

Cuomo: I mean, not everybody (at a festival) is totally in love with you already, you know? If you play at a smaller show that somebody’s willing to throw 20 bones down for, and drive there, park and everything, they probably already like you enough where you can be more comfortable. You can get away with more. Where like at a fest, you’re kind of more naked. It feels a bit like you’re just playing for a bunch of strangers that walked over in a field.

O’Keefe: You can play a festival and play inside of a tent, and it’ll feel a little more like a club show. I don’t know what it is about playing out in the open — I just feel like everybody’s a little bit more reserved because, I don’t know, it’s an exposure thing like Mario was saying.

The Real Chicago: What was the first CD you ever bought?

O’Keefe: Mine was In Utero and Guns n’ Roses Greatest Hits. I bought them at a Borders.

The Real Chicago: And what about the first song you learned to play?

Cuomo: “Hot Cross Buns” on recorder (laughter). If you wanna go all the way back. I can’t really play shit yet.

O’Keefe: I can’t really remember. Probably “Smoke on the Water” or “TNT,” one of those real easy beginner tunes.

Shop Around the Corner: Gather Home + ...